While many blackjack tables in Las Vegas spread terrible rules, there are still some quality games available. Most of the games listed are in high limit rooms, though some have a $5 minimum bet.

The best real money blackjack game in Las Vegas is in the high limit room at M Resort. It is a double deck table. The dealer stands on all 17s. A player may double down before and after splitting. Aces may be re-split. The posted minimum bet is usually $50. The house edge is 0.19%. 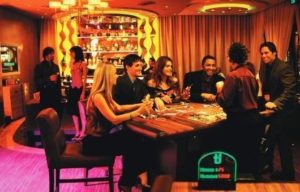 The second-best blackjack game in Las Vegas is spread by several higher end casinos operated by MGM Resorts. Treasure Island and Cosmopolitan also have the game. It is a double deck that stands on all 17s. Players may double down before and after splitting but may not re-split aces. The house edge is 0.26%.

The minimum bet is $25 at Treasure Island. MGM Grand offers this as a $25 game during slow periods but it may be $50 or $100. Aria, Bellagio, Cosmopolitan, Mandalay Bay and Mirage have a $100 minimum bet.

Double Down on Three Cards at Bighorn and Longhorn Casinos

There is a player-friendly rule in the six-deck $5 blackjack games at Bighorn and Longhorn. Players may double down on three cards at these casinos. Double down after splitting, re-split aces and surrender are also allowed. The dealer hits soft 17. 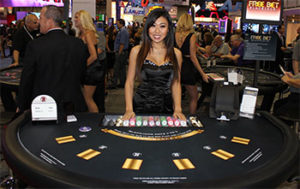 Six-deck shoe games at many high limit salons in Las Vegas casinos are the fourth-best blackjack games. The dealer stands on all 17s at these tables. Players may double down before and after splitting, as well as surrender and re-split aces. The house edge of this game is 0.29%.

The lowest minimum bet for this game is $25 at Treasure Island. MGM Grand has it for either $25 or $50, depending on the time of day. Bally’s and M Resort spread it for $50. It is $100 at Aria, Bellagio, Caesars Palace, Cosmopolitan, Encore, Hard Rock, Mandalay Bay, Mirage, Palazzo, SLS Las Vegas, Tropicana, and Venetian have it for $100. Wynn requires $200 for this game.

El Cortez in downtown Las Vegas offers the last single deck blackjack game in town that pays 3-2 and permits double down on any two cards before splitting. The minimum bet is usually $5. The house edge is 0.3%.

For players that wish to avoid picking losing blackjack tables, we recommend reading our worst blackjack games of Las Vegas 2018 page. The blackjack house edge calculator at Wizard of Odds was used to compute some of the house edges shown in this article.