Administering School Testing at a Casino Was a Total Fail 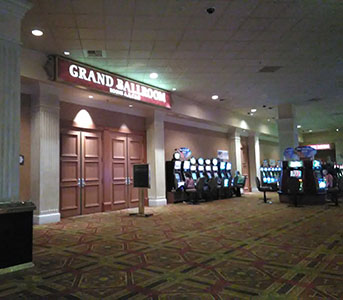 I found out last week that my daughter’s charter school would hold standardized testing in a ballroom at Suncoast. I joked on Twitter that this was in keeping with Las Vegas stereotypes. I’ve been asked several times by tourists if there are schools in the casinos among other similarly stupid questions.

Most casinos have convention and ballroom space in an area away from the gambling. Guests to these rooms often do not have to enter the casino at all. Some convention areas may require entry into the casino but are located on a different floor than any gambling.

That is not the case at Suncoast. These rooms are located on the second floor, steps away from slots and the bingo room. This helped turn my daughter’s school testing into a terrible experience.

There is no way to get to the second floor at Suncoast without going through the first floor casino. While you get used to occasionally bringing kids into casinos when you are a local, taking a fifth grader through a smoky casino to get to school is something I found inappropriate.

We arrived at Suncoast shortly before 9am. It was immediately before a bingo game started. That room is right across from the school testing. On the escalator to the second floor, we encountered a mad rush to make the bingo game. At the top, a woman pushed between us and darted to the bingo room. “She must really want to play bingo,” my daughter said.

The setup for testing check-in was poor. The line sometimes backed up out of the ballroom and onto the casino floor. Smoking is permitted in this area, not to mention it is illegal for minors to loiter around slots. This was poor planning by the school. It seemed like there was plenty of space in the ballroom lobby to accommodate all students waiting to check-in.

I decided to play poker at Suncoast while I waited on my daughter. She got done after about three hours.

“They play a lot of bingo here,” she told me when I picked her up.  I asked why she thought that and she told me that she could hear bingo and other casino announcements in the ballroom during testing and that it was disruptive. She asked if I was the John M the poker room called over the speakers, making it obvious to me that the announcements were at a volume level for her to hear them with clarity.

School should be embarrassed by its choice of testing venue

My daughter described the casino announcements as loud and annoying. She said the kids were distracted several times an hour by it.

Common sense should tell a school that operating functions in this environment is not appropriate, even in Nevada. Testing should be held in a quiet environment, not one where the students know the size of the casino’s current bingo coverall jackpot.

Last year’s testing was held at a college. This is the type of venue the school should consider in the future. Having it at a casino that has alternative access away from gaming is another reasonable option.

In keeping with Las Vegas stereotypes, my daughter’s school is administering standardized testing at a casino.

I did not name the school due to student privacy concerns. If anyone is interested in finding out the charter school’s name, reach me on Twitter @John_Mehaffey. I will respond privately.

Not a reflection of Suncoast

None of this was Suncoast’s fault. It operated a normal business day. It should not be expected to change anything to accommodate this type of use of its facilities. It was the school that should not have chosen this location.

My wife and I frequent Suncoast. Salvatore’s is one of our favorite restaurants. The Suncoast poker room is exceptionally underrated and is the only place in town to find low limit Seven Card Stud High/Low games. It also offers good table game rules and minimums. Check it out if you are ever in Summerlin.