Home » Blog » How to Get Around the Las Vegas Strip

How to Get Around the Las Vegas Strip 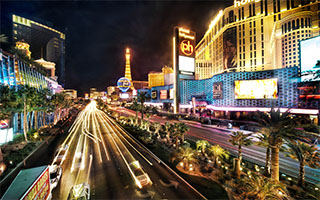 The traffic on the Las Vegas Strip is unbearable during most waking hours.  It can be a parking lot on weekends.  The best way to get from one casino to another is on foot.  This only works when needing to go one or two resorts away from your current location.  Any further distance is likely too far to walk, especially during the summertime.

The first instinct may be to get into a taxi cab.  This is convenient and will get you where you need to go.  On the other hand, it is expensive.  The only other form of transportation that costs more money is a personal car or limo.

Uber and Lyft both operate in Las Vegas.  These are ride-sharing services that operate similar to taxis.  The difference is that Uber and Lyft require the use of an app and a credit card.  The GPS on a cell phone will confirm the location of the call and the driver will go there.  He or she will then take you to your destination.   The cost of Uber and Lyft is about 40% lower than a taxi cab.

The Las Vegas Monorail runs from MGM Grand to SLS Las Vegas along the east side of the Strip.  It stops at MGM Grand, Bally’s, Flamingo, Harrah’s, the Las Vegas Convention Center, Westgate and SLS Las Vegas.  It costs $5 for a one-way trip. Daily passes are priced as follows:

Nevada residents may receive two-$1 tickets per day.  These must be purchased at the SLS Las Vegas or MGM Grand stations during normal business hours.  Nevadans may purchase a 20-pack of tickets every 10 days to avoid returning to these stations daily.

There are three trams that run along the west side of the Strip.  One connects Mirage and Treasure Island.  Another moves guests between Monte Carlo, Aria and Bellagio.  A third runs between Excalibur, Luxor and Mandalay Bay.  All of these trams are free of charge.

Many tourists drive to Las Vegas or rent a car.  Las Vegas Blvd is usually a terrible way to get between casinos.  Nearly all resorts have more than one entrance.  Some are not accessible from the Strip at all.

Koval Lane is the main road that runs along the rear of the resorts on the east side of Las Vegas Blvd. It connects Flamingo Road and Sands Avenue.  Koval Lane is the best way to access Flamingo, Linq, Harrah’s and Venetian.

Las Vegas Blvd should not always be used as a way to get from one resort to another.  The roads mentioned in the section above can be good alternatives.  Another option is Paradise Rd, which is east of the Strip.  It connects the 215 Beltway to Tropicana and then runs up to Las Vegas Blvd north of Stratosphere, although it requires using Swenson between Tropicana Avenue and Harmon Rd due to one-way designs in the area by UNLV.  Paradise Rd is also the best way to get to Westgate and SLS Las Vegas.

All roads that run east/west have congestion around the Strip except for Desert Inn Rd.  This road bypasses the Strip, I-15 and the industrial district.  This is a great way to get across the Strip without traffic.  Desert Inn Rd may be accessed by Paradise Rd on the east and Valley View Rd on the west.  There are no traffic signals between those two roads on Desert Inn.