Home » Blog » Preparing to Have a Blast On Super Bowl Sunday

Preparing to Have a Blast On Super Bowl Sunday

The Super Bowl has become far more than just a championship game. Thanks to its halftime show, coverage, and fanfare, it’s one of the most-anticipated annual events. This year’s NFL championship game will be no different with an exciting matchup between the Bengals and Rams.

We’ll help you prepare for the big game with in-depth Super Bowl LVI information, fun facts, and party ideas. You won’t want to miss this advice as we cover everything from unique betting games and charcuterie boards.

To get ready for Super Bowl LVI, you need to know the essential details. Don’t get ahead of yourself thinking about snacks, commercials, and party activities until you know the who, when, and where of the big event.

The Cincinnati Bengals will face the Los Angeles Rams in Super Bowl LVI.

Where is Super Bowl LVI?

Super Bowl LVI will occur at SoFi Stadium in Los Angeles, California. The venue will expand from its usual 70,240 seats to 100,240 seats for the big game.

When is the Super Bowl this year?

Who is performing at Super Bowl halftime in 2022?

The football game of the year inspires unforgettable parties, delicious food, and side games. If you’re throwing a party, you’ll want to learn about the perfect Super Bowl snacks, entertainment, and activities below.

You can’t have people over for a Super Bowl LVI party and serve them saltine crackers and Apple juice. The best hosts go above and beyond to dish out mouth-watering foods that everybody loves. Even better if the dish matches the theme.

Wings are easily the most popular Super Bowl snacks, with over 1 billion wings consumed on game day. Another classic standby is a Super Bowl charcuterie board, where the cold cuts and cheeses create an end zone or goal post. Finally, chips, guac, and salsa are a mainstay in many homes on game day.

Sports wagering and fun mini-games move a lot of money. Fans of all types turn to online sportsbooks and other sites like FanDuel to get in on the action. You can bet on point spreads, exotic Super Bowl prop bets, and even live stakes during the game.

Super Bowl betting games like “squares” and bingo are also worthwhile. Specific player touchdowns, scores at the end of each quarter, and overall winner are just a few of the conditions that could be on your sheet. These games are an excellent way for party-goers who aren’t massive football fans to have some fun.

In recent years, one of the main attractions has been the ads when the game isn’t on. Super Bowl commercials are always hilarious.

The Super Bowl creates opportunities for other non-betting side games, such as an MVP hat draw. Pass the cup is another game that captivates general audiences. It involves passing a cup around after each game possession. Depending on the rules you set, the person holding the cup scoops a prize or chugs the drink when the game ends.

The ideal venue makes all the difference when watching the Super Bowl. One of your friends, for example, might have the perfect living room set up with a big-screen TV, plenty of seats, and an excellent kitchen for entertaining.

Another popular spot to party is at the neighborhood watering hole. Many bars have parties with several projectors and sell discounted food and drinks on the big day!

Please wait ...
Bet on the Super Bowl at BetOnline! 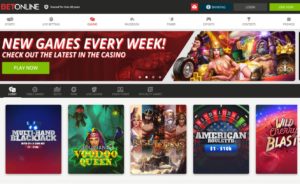 Super Bowl party guests don’t walk through the door expecting a pop quiz. However, you can make a fun game out of the following Q&A material.

How much do halftime performers get paid?

Super Bowl halftime performers don’t get paid. Instead, the NFL only reimburses their travel and production costs.

What four teams have never made it to the Super Bowl?

The Cleveland Browns, Detroit Lions, Houston Texans, and Jacksonville Jaguars have never been to a Super Bowl.

Who makes the Lombardi Trophy?

Which city had the coldest Super Bowl?

New Orleans played host to the coldest Super Bowl on Jan. 16, 1972. The kick-off temperature was 39 degrees, and the high was 43 degrees.

How much do Americans spend on beer for the event every year?

Americans spend $1.2 billion on beer alone during the two weeks before the Super Bowl.

How many pounds of avocados get eaten on Super Bowl Sunday?

People eat roughly 13.2 million pounds of avocados on Super Bowl Sunday. This amount is the most avocados consumed during any day of the year.

Which team made it to 4 Super Bowls in a row and lost them all?

The Buffalo Bills made the Super Bowl every year from 1991 to 1994, losing each time.

Could Joe Burrow be the youngest QB to win the Super Bowl?

Take Your Super Bowl LVI Experience to the Next Level

The Super Bowl can be fun with nothing but a few buddies, nachos, and some beers. If you really want the ultimate football experience, though, you should borrow the above suggestions. Betting games, quizzes, tasty snacks, and an excellent venue are keys to a winning football extravaganza.

Please wait ...
Bet on the Super Bowl at BetOnline!

Enjoy The Super Bowl At These Online Casinos With Sportsbooks