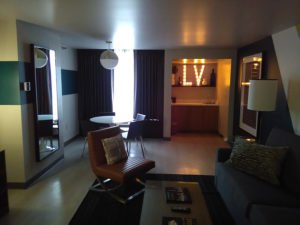 I play more at Plaza than any other Las Vegas casino. It offers better video poker than nearly any other casino, even in the locals’ market. I’m there playing the full pay games at least once a week.

I don’t ask Plaza for many comps. I rarely use even a portion of the $30 a week in food comps they give me from my play.

My wife and I decided to celebrate her birthday at Plaza. I asked a host for a cabana suite. These are rooms on the same floor as the pool with a patio that opens up onto the pool deck.

We stayed in one of these rooms last year. We received a 50 percent discount for that stay. This year, the host gave me the room as a comp. Our stay was for the weekend of August 11-13.

When we got the room, there was a surprise. We did not get the same room as we had last year. We received an upgrade to a full-sized suite with separate living room that included a wet bar. The room did not have the patio the others did but we got the better end of the deal there.

My wife and I made 6pm reservations at Hugo’s Cellar. It is located at 4 Queens. It is an old-school dining experience that specializes in steaks and seafood.

Meals include a salad. It is prepared on a cart with over 20 ingredients. Sorbet is served between courses to cleanse the pallet. Chocolate covered fruit is served after the main course. Guests that order wine have it brought to the table by the sommelier. He tastes it for the table.

Hugo’s Cellar was as great as it always is. We will return again for our anniversary in a few months.

We are regulars at the LA Comedy Club at Stratosphere. We took a cab from Plaza to Stratosphere after dinner. The first four cab drivers staging in front of Plaza refused the fare. It was not far enough. The fifth one finally said he would take us. The fare was $9.25.

Uber and Lyft are difficult to connect with at this location. The small fare wasn’t worth the walking required to find a better ridesharing location.

We saw Butch Bradley’s 10pm show at LA Comedy Club. It was hilarious. The midnight show was a roast battle. Local comedians pair off in a playoff system that lasts several weeks in a free show. These roast battles occur every few months.

We had another cab issue on the way back downtown. The cab tried to drive us around the Stratosphere in a circle. That would have about doubled the fare. I stopped him before he could pull it off. He still managed to get the fare to $13.

As I mentioned, our room was right by the pool. The pool lobby was right next to our room. We spent a couple of hours at the pool on Saturday. The drink prices there were lower than I expected. The pool was relatively busy. There were periods where there were as many kids in the pool as adults.

Played Video Poker and Even an Old Slot

After the pool, I gambled for a couple of hours. I played two coin games. One was $.25 Joker Poker. The other was a $1 slot that was built for the Las Vegas Club decades ago. This is a reel slot with a return of 99.3 percent, according to Plaza CEO Jonathan Jossel. This is possibly the slot machine with the highest return in Las Vegas. The game spits out $1 coins.

My wife and I decided to spend some of it at Oscar’s but there was a two-hour wait. We decided to try out Grotto at Golden Nugget. It is an Italian restaurant.  Grotto was good and the prices are reasonable considering its location.

My wife and I went back to Plaza after and gambled a little and got some drinks before calling it a night. It was a fun weekend celebration of her birthday. Plaza took good care of us.

I started frequenting Plaza about two years ago. That was when the Las Vegas Club closed and the video poker machines I played were moved to Plaza.

Plaza was often dead, especially on weeknights, when I first started playing there. There were times that 9pm looked like the middle of graveyard. That has changed. It is rare to see the casino dead during any normal hours. It is noticeably busier now compared to a couple of years ago.

Plaza management has worked to attract players. This includes an old-school mentality when it comes to comps and fair gambling odds. The employees are more hospitable than average, creating a friendly environment.

The casino offers some of the best video poker games in Las Vegas. Craps is 10x odds. There is also Crapsless Craps. All normal blackjack games pay 3-2 and have double down before and after splitting.