I was invited to hit some golf balls at Topgolf in Las Vegas by an industry group. We had about a dozen people and reserved two pads. The Chairman Suite was available when we arrived. We made a deal to get it. The Topgolf Chairman’s Suite was an impressive upgrade.

The Chairman Suite at Topgolf is located on the rear of the top floor by the upper-level pool. It is almost entirely enclosed. The only part of it that is open is the area near the tees. 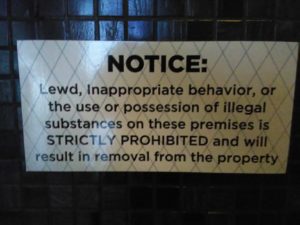 It seems some previous guests used the private bathroom for unintended purposes. There is a sign warning about what will happen if you are caught doing so.

Admittedly, I had never hit a golf ball outside of a putt-putt course. I was concerned about how I would do. I worried that at some point I would launch the golf club instead of the ball. That’s how bad I was at first.

There were experienced golfers in the group that showed me how to improve my game. I picked up some of it and played on a somewhat competent level. It helped that we were on the top level of the tees. This gave me the ability to hit the ball farther on the range than I would from the lower levels.

I still had some misses, but not as bad as others in the group. There were a couple of times golf balls hit by others ricocheted through the suite.

Topgolf scores players on the ability to hit the ball into sections of the driving range. The farther out the shot is, and the closer to the center of the section the ball stops, the higher the score. There are multipliers for repeat hits. There is a map of the scoring on the machine that dispenses the balls. 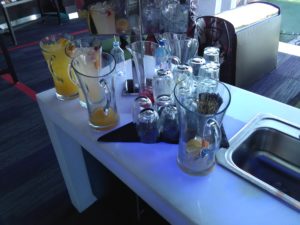 We ordered numerous food trays. They ranged from BBQ and pizza to meat and cheese trays. All were of the quality you’d expect at a place like this. We also had pitchers of sangria and other similar drinks.

Unlike bowling and billiards, alcohol consumption didn’t improve my golf game. My score peaked in the second game and slowly dropped after that. It’s clear that I could use some practice. It was still a blast.

In addition to the range, there was video poker at the bar. The paytables are on the lower end. There were other activities like ping pong tables and two pools. There are 107 different hitting bays and five bars at Topgolf Las Vegas.

Topgolf was a fun afternoon activity. I highly recommend it, even for people that are not into golf. It is located behind MGM Grand on Koval Ln.