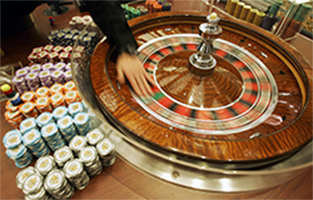 Venetian has a new game on its casino floor.  It is called “Sands Roulette.”  The installation of the game was first reported by Michael Shackleford at the Wizard of Vegas forum.

Sands Roulette has three zeros on the wheel and felt.  All other roulette tables in Las Vegas have one or two zeros.  The payout for each Sands Roulette wager is the same as it would be at a double zero table.

The minimum bet was $10 during my visit.  That is the same as some double zero tables located near the Sands Roulette game.

The house edge for Sands Roulette is 7.69%.  The only extra spots on the felt are the triple zero, which uses the Sands logo, and a green spot where players may bet all three zeros.  That pays 11-1, just as any other three-spot street pays.

How Sands Roulette’s House Edge Compares to Other Games

The 7.69% house edge is the worst of any table game one will find in a casino beyond the Big 6 Wheel.  There are some exceptions to this that include bonus wagers and the sucker bets on a craps table.

There are roulette games in Las Vegas that offer bets with a house edge as low as 1.35%.  That is found at European Roulette tables at Aria, Bellagio, MGM Grand, and Mirage.  That house edge applies to the even money bets where half the wager is returned when zero is called.  Otherwise, European Roulette has a house edge of 2.7%, which also applies to standard single zero roulette games like the ones offered in the Venetian and Palazzo high limit salons.

What to Play at Venetian and Palazzo

Players should consider playing video blackjack at Venetian and Palazzo.  The minimum bet is $5.  Blackjack still pays 3-2 on those machines.  Players may double down before and after splitting.  Surrender is permitted.

Sheldon Adelson is founder and CEO of Las Vegas Sands, parent company of Venetian.  Adelson stated in a recent interview with Yahoo! that he is against the exploitation of poor and young people.

“Everybody thinks that because I’m wealthy, all I want to do is make more money. Yes, I want to make more money. But not from exploiting young people and poor people. There’s no principle that I would surrender in favor of money.

This is a moral issue. When we have somebody [in the casino] that we see needs to be treated, we stop dealing to people. I don’t have to hurt people to make money.”

Rolling out a roulette game with a house edge of 7.69% when the industry standard is 5.26% apparently does not exploit or hurt people.  A player losing money 46% faster than a normal roulette game is simply a new form of responsible entertainment.

You’ve Never Seen a Keno Board This Massive

The Art of Getting Free Drinks at Casinos