Desert Nights Casino calls itself “The Oasis of Online Gambling,” offering slot machines, table games, video poker, bingo, and lottery gaming. American players might see the site as a safe haven of sorts. The Desert Nights casino review shows that they offer RealTime Gaming and Rival Gaming software in a safe and reputable gambling environment. Complaint resolution at the top review sites are over 90%. That might not be a good rating on Amazon, but in the US online gambling market, it’s spectacular.

Deserts Nights Casino is relatively new, and does not offer a live casino at present. Otherwise, it has all the gambling needs for US players. They offer 160 games, with most of those being the best RTG and Rival Gaming slots available.

Deserts Nights Casino offers the best slot machines from Rival Gaming. Though the site licenses casino software from RealTime Gaming, there is no evidence of RTG’s wide array of slots on the website. That’s a drawback because RTG has bigger and better progressive slots than Rival Gaming. If you prefer online slots with better graphics and more bonus features, then the Rival Gaming slots selection should appeal to you.

OUSC takes its online casino reviews very seriously. Here you will learn everything you need to know about this casino site.  Deserts Nights Casino offers online and mobile casinos, but no live dealer games. Players can gamble using either the downloadable casino software or instant play Flash games. The Flash casino has a smaller number of games than the downloaded casino package, but the selection is still above average for mobile casinos. 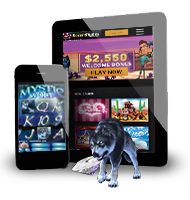 Android 4.0 or later devices are compatible with the apps if you use Chrome 31 or later. This includes the Samsung Galaxy S7, the LG G5 Sprint, and the Nexus 5X. Players should remember that Chrome updates are free, so there’s no reason an Android smartphone or tablet wouldn’t work to access the site.

BlackBerry support is available, which is one advantage many mobile casinos don’t offer. Desert Nights says it supports “many other devices” such as the Windows Phone OS, Symbian OS, and Java OS. The site allows players to sync their device by scanning the QR Code on the Desert Nights Casino mobile page.

The Desert Nights Casino instant play uses Flash games. Players won’t get the full list of games that are available in the downloadable client, but the selection is more than enough. Many of the best instant slots are available from RealTime Gaming and Rival Gaming.

Our Desert Nights Casino review shows you the latest and best bonuses they have to offer. New and loyal members of this online casino will be able to get up to $2,550 in casino bonuses. These range from a great Welcome Bonus to Monthly bonuses.

The basic welcome bonus at Desert Nights Casino is a $2,500. This deposit comes in two tiers, with the first bonus up to $1000 and the second bonus up to $1,500. Each has a 28x rollover requirement. In the table below, I list the max limit on the bonus, the match rate, and the rollover. On both deposits, the max bonus is also the minimum amount you’ll need to invest in your account to collect the biggest bonus.

It’s a large bonus for American gamblers, though you need to know a few facts about the wagering requirement. It only applies to slot machines, real money keno, and online scratch cards. Table games like blackjack, baccarat, craps, and roulette do not apply towards the rollover. Read the full terms and conditions on the Desert Nights Casino FAQ, because players have complained that the policies are confusing — if not deceptive.

All depositors receive a $50 free welcome reward. This bonus is offered for other table games, so most players will look at this as a $50 table games bonus. The rollover on this reward is 40x the bonus, so you’ll need to wager $2,000 to clear the wagering requirement. 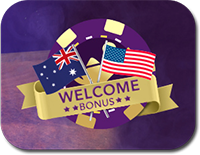 Australian players receive a better deposit bonus than the non-Aussies on the site. The size of the bonus offered remains the same ($2500), but the match rate is much better on this offer: 250%. This means a player only has to deposit $1000 in order to receive $2500 in bonuses. The rollover on this offer is 35x the bonus received. If you receive a $2500 bonus, then you’ll need to wager $87,500.

That is the secret to all the promotional bonuses offered by online casinos: the house edge means they won’t have to pay a lot of customers. Gamblers need to get lucky to cash out bonus cash.

The Desert Nights Casino no deposit bonus is $10. Players who register an account receive ten dollars of free casino money. No deposit is needed and the bonus comes with no obligation. It has a rollover of 50x, and the maximum cash out is $170.

Desert Nights Casino at times offers special monthly deposit bonuses. These offers usually include higher match rates than usual. They might only last for two weeks at a time.

I’ll give an example of these offers. In May 2016, the site offered a $500, 150% bonus. To activate this bonus, you needed to use the promo code JACKPOT5x. The rollover on the offer was 34x the deposit plus bonus. Only slots, keno, and scratch cards were viable playing options. The promotion ran from May 2nd to May 15.

Players need to remember to input the promotional code. If you do this after making a deposit, the code won’t help you.

The VIP Club at Desert Nights Casino has four membership levels: Explorer, Bronze, Silver, and Gold. Explorer Level is the first membership tier you’ll enter. When you make five real money deposits on the site, you’ll become an Explorer Level member. The benefits of each tier are explained below.

The best comps in the casino, the best cashback, and the fastest withdrawals. Also special VIP-only promotions. Includes the benefits of all other tiers.

The VIP Club could be a little more elaborate, but it’s still a nice package of gaming incentives. The site is somewhat vague about certain aspects of the VIP Club. To learn more about the VIP Club at Desert Nights Casino, send emails to [email protected].

Desert Nights Casino review shows them offering 7 table games. US players that are used to RTG online casinos might consider that low. The essential casino games are here, though.

Video poker is the gaming machine that is overlooked all-too-often when compared to online slot games. However, video poker has much better odds than slot machines. Video poker is a game where strategy plays a big role, so players need to study and memorize the strategies needed to succeed. If not, then the vaunted odds of video poker are no better than other games.

Desert Nights Casino offers 7 types of video poker. In the space below, I give a short description of each. When it’s possible to verify the odds, I include the expected return on each game.

Players have pointed out the Rival Gaming’s list of video poker leaves something to be desired. Some of the game choices have been phased out of brick-and-mortar casinos. The house edge is high on a few of the games. Even the sound quality on the games has been criticized. Despite that, video poker remains one of the best gaming propositions on the site.

Desert Nights Casino offers a large list of specialty games. The specialty games are sometimes called arcade games, a catch-all term for the lottery-style games and other titles that wouldn’t normally be on a casino floor.

Bingo is well-represented on the site, giving players the full range of playing options. The scratch cards are well-represented, though they play quickly and have no strategy element. Keno gamblers receive two game options.

The Sudoku Numbers Game plays a lot like a slot machine, but it’s not an online slots game. The game uses a 3×3 grid. At the beginning of the game, 9 numbers fill in these boxes. If you get a three of a kind, you’ll win money. The Online Sudoku specialty game was designed by Rival Gaming itself. It’s a unique little game that players should try, especially if they enjoy the real world Sudoku puzzle-solving game.

There are many different kinds of slots being offered at Desert Nights Casino. You will find progressive slots, as well as some of the top featured and i-slots from Rival Gaming.

The homepage of the site features several games. Since these are the easiest to find and the most likely to have special offers, OUSC offers details of those games. They represent a nice sampling of what Desert Nights Casino has to offer.

These are just a few of the Rival Gaming slots offered by Desert Nights. Games like Loco 7s, Gnome Sweet Home, Silver Unicorn, and Zombiezee Money are available for play. The visually striking Jolly Roger’s Jack Pot is available, too. Popular games like Scary Rich, Costume Party, and Coins of Olympus remain part of the catalog. A game about which players might wonder is Wild Carnival slots because many of the Desert Nights Casino advertisements feature images of the Brazilian showgirls from Wild Carnival.

The main slot machine page is not the full complement of one-armed bandits on Desert Nights. If you don’t look closely, you might miss the i-slots page on the site. These are interactive slots with bonus games in which your decisions have a real effect on the outcome of the game. Once again, these are Rival Gaming slots. There aren’t many of them, so I’ll provide the whole list of interactive slots on Desert Nights.

$2,550 in Total Casino Bonuses
Play Now
About the Author

Desert Night Casino reviewed by Neil White with a rating of 4.0 /5 .

We apologize for the inconvenience, but this content is not available.
Go Back