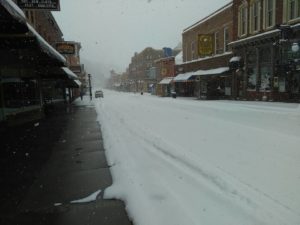 Some of the slots decline can be attributed to the loss of one day in 2017 compared to the 2016 leap year. This does not account for all of the losses based on the average daily win.

February was the eighth month in a row that Deadwood posted a loss against the previous year in terms of gaming win. The only month that improved over the past year was June 2016.

Annual gaming revenues dropped to $99 million in 2016. That was the lowest gaming win in a decade for Deadwood. The first six months of the year included craps and roulette numbers for the first time. Those two games were rolled out in July 2015.

Deadwood casinos predicted that craps and roulette would have a major positive impact on gaming revenues. The increase was short-lived.

The occupancy rate does not tell the entire story. The Comfort Inn in Deadwood suffered catastrophic damage due to a busted water pipe and was forced to close on February 1. The damages will keep that hotel shuttered until at least Memorial Day. This took 69 hotel rooms out of the market that did not count in the February occupancy total.

What is causing Deadwood to decline?

There are several issues that affect the tourism industry in Deadwood. The region depends on oil drilling and coal mining.  Oil prices dropped last year to the lowest point since the Great Recession. This affected the oil-rich economy in North Dakota. The movement away from coal hit towns in northeastern Wyoming especially hard. The largest coal deposits in the world are about 100 miles west of Deadwood.

The economy is not the only reason there is a recession in Deadwood. Some poker players have avoided Deadwood after accusations surfaced about player collusion. The South Dakota Video Lottery permitted slots for the first time in 2013. This brought familiar titles to gamblers in local bars. This made it so that South Dakotans no longer had to drive to Deadwood to play slots.

Blackjack games do not permit surrender or re-split aces. Only two casinos stand on all 17’s.  One of those – Celebrity Casino – only deals blackjack on weekend nights. All poker tables in Deadwood now have a $5 max rake.

Slot machines generally only return around 90 percent. That is in the same range as the state’s video lottery games.