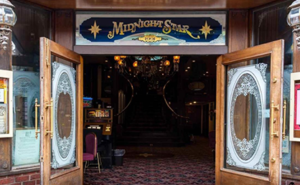 Gaming revenues in Deadwood have suffered in recent years. The industry peaked in 2012 when it generated $107.4 million. In 2016, revenues were down 8 percent from the peak, posting the lowest numbers since 2007.

The news is not entirely bad in Deadwood. Newer resorts outside of downtown seem to be performing well. This includes a recent renovation and expansion at Cadillac Jack’s.

The downtown area has been affected more by the decline in Deadwood tourism than newer properties have been. These properties tend to be older. Many were built in the late 1800s or early 1900s during the city’s mining boom. This seems to have created a buyer’s market as eight casinos in Deadwood are currently listed for sale.

Deadwood Gulch once spread live blackjack. That is no longer the case. However, a new owner could easily bring live table games back. The listing notes that the property is already approved for an expansion that could nearly double the gaming space.

Midnight Star was Kevin Costner’s Deadwood casino. It is the only casino listed for sale in Deadwood, South Dakota that is currently shuttered.

Midnight Star closed at the end of August. It was on the market a few days later. The building has three levels and includes two restaurants. The listing notes that Costner’s memorabilia is not included in the sale. Costner sold 103 acres of undeveloped land in Deadwood last year.

Hickok’s is on Main Street. It offers 22 hotel rooms and a small casino that includes slots, video poker, and video table games. There is also an attached smoking lounge.

Hickok’s expanded into the former Cody’s space at one point but later abandoned the neighboring property. That storefront is not a part of this sale as it is now a Harley-Davidson store.

Bodega is a moderate-sized casino in the middle of Main Street. The sale includes a full-service restaurant. Its hotel partner is the Bullock Hotel, which is also on the market. Bodega was previously a sister property of Gulches of Fun, now known as Comfort Inn/Deadwood Mini-Golf.

Bullock Hotel is located across from the Deadwood parking deck on Main Street. It hosts 28 remodeled hotel rooms and a full-service restaurant. There are also dozens of video poker and slot machines. Video blackjack is also spread in the casino.

Deadwood Dick’s is located across from the post office, two blocks off Main Street. The property includes a small casino, hotel, and restaurant.

The Iron Horse Inn is the least expensive casino for sale in Deadwood. It is located downtown, just off Main Street. It includes a small hotel and restaurant, as well as a gaming floor that was recently merged with the Wooden Nickel casino.

Saloon No. 10 No Longer on Market

Saloon No. 10 may be the best-known casino in Deadwood. Its previous location is where Wild Bill Hickok was shot. The chair he was seated in is on display at the new location.

Saloon No. 10 went on the market for $10.5 million in 2009. After many years on the market, no buyer was ever found. The listing was removed.

Loss of Other Downtown Deadwood Casinos

This decade has seen several casino closures in downtown Deadwood. The former Wild West gaming complex no longer has casinos.

Miss Kitty’s closed in 2013. Bourbon Street shuttered that same year. One of the three storefronts occupied by the shuttered Bourbon Street casino is currently for sale. The Cody’s property, once a casino, is now home to the expanded Deadwood Harley-Davidson store.

The Reopening of US Casinos Calls for Safety Measures

Tags: Deadwood, South Dakota, US Casinos
About the Author