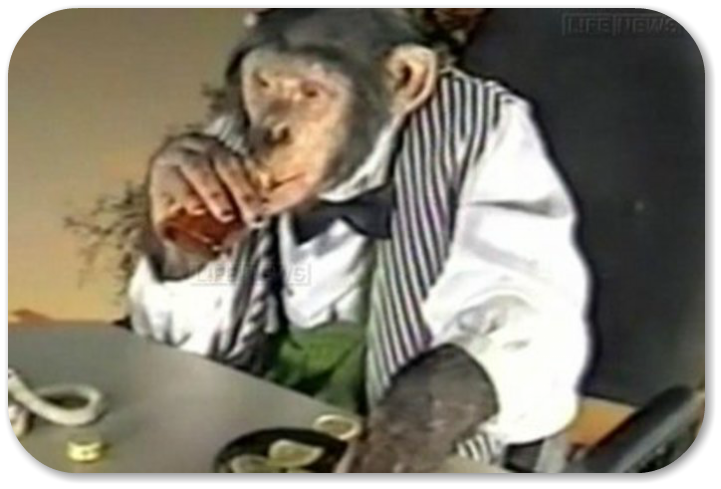 A casino chimpanzee working at Moscow’s Casino Kosmos, named John, has died at the age of 24 after being routinely offered alcohol and cigarettes whilst on the job. Chimps in captivity can live for between 50 to 60 years when in good health.

John was previously used to entertain the casino patrons and then became a croupier at the roulette tables. But as a result of the prolonged substance abuse, the chimp had been transferred to Glendzhik safari park in Moscow back in 2008 in a bid to improve his health.

Park director, Nikolay Mashinsky, told the media that for the first year in treatment, John didn’t have visitors due to his poor health. At the park facility, he was slowly weened off the booze, but because his immune system was weak, he felt very bad. Mashinsky said the substance abuse had taken its toll on John’s mental health, and the former casino chimp would go into rages while getting clean, hitting walls of the enclosure he was in, and even refusing to eat.

However, by 2010 his health had improved significantly, and after kicking his alcohol and cigarette habit, he proceeded to entertain visitors at the safari park, showing off the drawing skills he learned since being transferred to the safari park. John quickly became a popular attraction with visitors, and was able to shine in his newfound health and new friendships with park staff.

But he continued to deal with the consequences of his former lifestyle and his health issues were ongoing. He suffered from diabetes, dermatitis and oedema. These health conditions lead to his eventual death.

Unfortunately, John’s case isn’t the only example of animal abuse at casinos. In 2015, CompassionWorks International staged a protest calling for the end of animal abuse at Dirk Arthur’s magic show, which featured tigers and other big cats. That same year, Poker Hall of Famer Daniel Negreanu supported PETA’s wishes in requesting Harrah’s Cherokee Casino to close its Cherokee Bear Zoo in North Carolina.