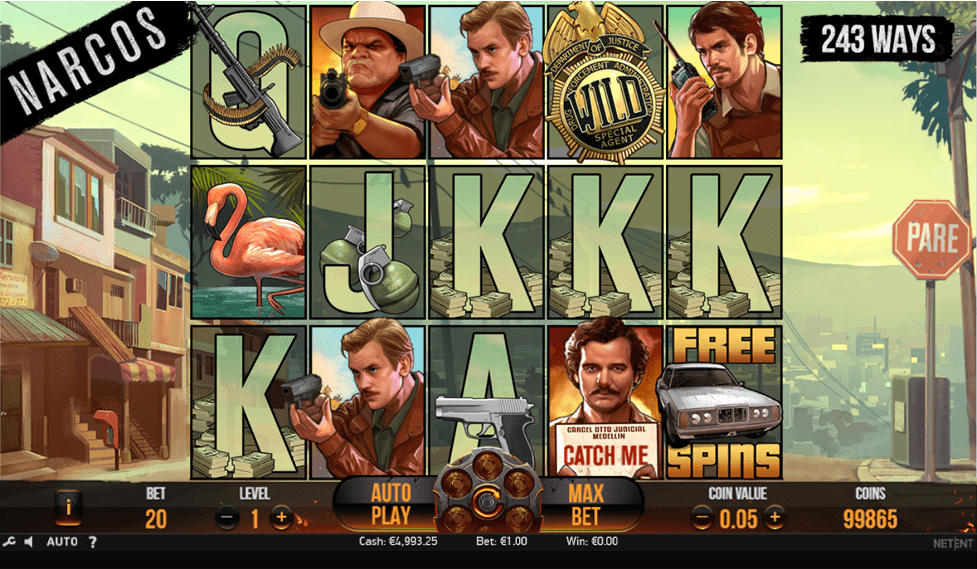 Narcos is set to be the latest in the series of branded blockbuster movie-themed slots released by NetEnt. This one is based on the story about the notorious El Patrón, the infamous cartel boss, who is also the central figure around the Narcos TV show released by Gaumont.

What Can We Expect from Narcos Video Slot?

This online slot game is bound to meet everyone’s expectations, firstly due to the fact that it is based on the multi-award-winning series released by Gaumont. It first aired back in August 2015 on Netflix, giving viewers a glimpse into the dangerous world of gangs and cartels, as well as the constant struggle by federal law enforcement to prevent their influence.

It comes as no surprise that the actual thematic of the slot game revolves around precisely that. Its 5-reel 3-row grid is set against a backdrop of chases and pursuits between the police, the DEA, and the entire Medellin Cartel. 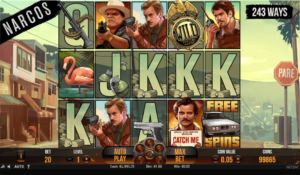 All the action at the front of the slot screen is what has expectant Narcos players extremely thrilled. The Free Spins feature is commonly popular, and with the added ability to turn one or more high-value symbols from the reels into Wilds, it further adds to the excitement.

When these Wilds form a win, they start moving across the reels and increase the potential for winning combinations. Aside from this, the Narcos slot title comes with a range of additional features:

This offers players the ability to transform regular high-value symbols into Wilds.

This feature is triggered during the main game and sees the Wild standing at a single position during a winning streak, and moving one field to the left on each spin.

When three Locked Up symbols land in the same row, they lock up random coin win symbols and trigger the feature. During this time, they additionally lock up a golden briefcase symbol, bearing either a multiplier, upgrade or a big coin win.

All this and more is available straight from the Narcos slot by NetEnt. The slot game is brought to you by the master licensing and brand management agent, Evolution USA. They brokered the license agreement for this latest addition to NetEnt’s massive game library, which the Director of Games, Bryan Upton, proudly promotes:

Since we first announced the deal with Gaumont to bring Narcos to the reels, the anticipation among players and our operator partners has been huge. We are confident that the game will more than live up to its lofty expectations and add an exciting new option to our unbeatable branded catalog.

NetEnt is a publicly-traded international interactive gaming entertainment corporation, listed on the Nasdaq Stockholm (NET-B) with approximately 900 people currently employed. It offers a range of casino and gambling titles to reliable and renowned operators worldwide ever since their beginnings back in 1996. It constantly promotes the latest innovations and thus advancing the industry as a whole.