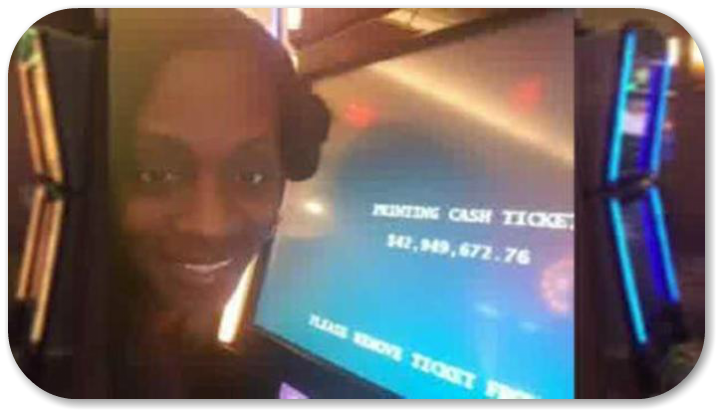 A New York woman had thought she had won the biggest slot machine jackpot in history: $42,949,672.76 – only to be told by casino management that she won’t be receiving the payout because it turned out the slot machine had malfunctioned.

She had been playing the Sphinx slot game at the Resorts World Casino in New York and a message popped up on the screen telling her she had won the eight-figure jackpot, but as it turns out, the mother-of-four is only entitled to a steak dinner. In a selfie the slot player had taken when overcome with euphoria, you can clearly see the multi-million dollar winning notification on the screen.

Resorts World Casino has a notice attached to all their slot machines, which warns players that “Malfunction voids all pays and plays.” The New York State Gaming Commission supported the casino’s decision as the slot machine did indeed malfunction.

As you might expect, the slot machine player is wanting to sue Resorts World Casino, believing she is deserving of more than the $2.25 and complimentary steak dinner she received as a result of the slot malfunction. Her lawyer Alan Ripka believes she is entitled to receive compensation, explaining:

“The machine takes your money when you lose. It ought to pay it when you win. They win and the house doesn’t want to pay out. To me that’s unfair.”

Ripka said at the very least she should win the maximum jackpot allowed, which on the Sphinx slot machine she was playing, would be $6,500. According to the gaming commission, the casino could not legally award the max payout.

It will be interesting to see what comes of the litigation, but if history is anything to go by, she won’t be having celebratory drinks as a result of getting a positive result. Of course, this is not the first time a slot machine has malfunctioned. Following this incident, the slot machine was pulled from the casino floor, and was fixed before being returned.