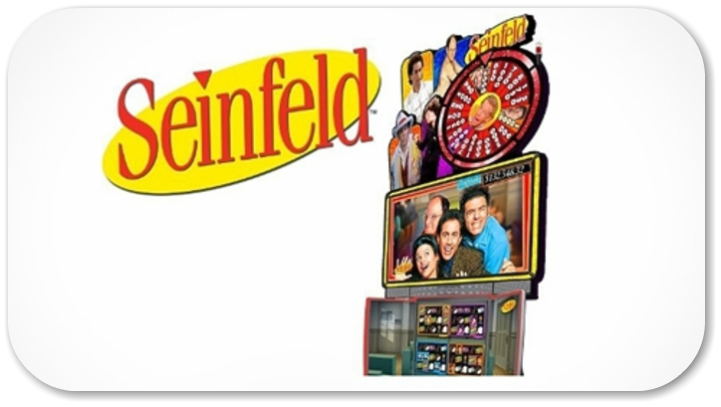 Producers of Seinfeld stopped making new episodes years ago, but the show still has an enormous following thanks in large part to being a truly original American sitcom. There were 9 seasons of Seinfeld which ran on NBC from 1989 to 1998. The hit TV show was ingrained in our pop culture for nearly a decade with laugh out loud moments and phrases like “double dipping” and “yada yada yada”, and of course who can forget the Soup Nazi.

Fortunately, the new Seinfeld slot has done a great job of bringing back the old memories of the sitcom. Many longtime fans of the TV show will be saying it’s about time they released a Seinfeld slot machine, it was one of the best sitcoms of all time. The Seinfeld themed slot machine was unveiled for the first time this week at the 2016 Global Gaming Expo (G2E) in Las Vegas. This follows in tradition with other modern slot games based on popular TV shows of the past, such as Little Britain, South Park, Pawn Stars and Game of Thrones.

Scientific Games have been able to turn the extremely popular TV sitcom into an interactive and fun slot experience using the pioneering Gamescape platform. The Gamescape slot machine box features 5 screens, including a tablet-sized touchscreen button and HD screens to provide the ultimate slot gaming experience. Players get to use their hands to become a part of the game.

A big part of the new Seinfeld slot from Scientific Games is the Festivus Wheel which awards players with credit prizes, as well as a wide-area progressive jackpot featuring George’s father Frank and the “no more soup for you” bonus. All of the main characters, including Jerry Seinfeld, George Costanza, Elaine Benes, and Cosmo Kramer feature prominently during the gameplay, especially whenever you trigger bonus games. All bonus features in the Seinfeld slot are triggered by one of the four oversized character symbols from the famous Seinfeld series.

Derik Mooberry on the Seinfeld Slot

“The eccentric and fun-loving nature of one of America’s treasured sitcoms, paired with the advanced technology of our groundbreaking GAMESCAPE cabinet, truly delivers an unforgettable slot experience that transports players all the way to 81st Street on New York City’s Upper East Side,” Derik Mooberry, the Chief Executive of Gaming for Scientific Games, said.