From the lottery to casino slot games, it seems gamblers are hitting jackpots left and right in the United States. As a casino gambler, it can be fun and encouraging to hear about the latest big wins. In Las Vegas, a woman from Milwaukee, Wisconsin added a big cushion to her bank account after winning a $1.45 million jackpot while playing at the Golden Gate Vegas Casino earlier this week. 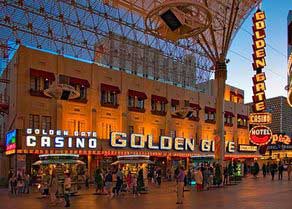 The Golden Gate Hotel and Casino is located in Downtown Las Vegas and that is where a player named Rhonda L. decided to spend some of her time during a recent trip to Sin City. Rhonda was up quite early on June 5th or perhaps she had never been to sleep! Whatever the case may be, she was paying the Million Degrees game at the casino when she hit the 9 spot and won the large $1.45 million prize.

After the jackpot was won, the Chief Executive Officer of the casino, Derek Stevens took to Twitter to discuss the big news. Stephens said that the win was the largest jackpot that he had seen awarded within his career.

According to Stephens, Rhonda won exactly $1,453,640.47 while playing the game in the early morning hours. Rhonda is a fan of the D and Golden Gate and was in town to take part in a bingo tournament when she managed to earn a big win from a completely different type of gambling game. It won’t be surprising to see Rhonda spending a little bit more time downtown spending some of her prize money, hoping to win yet another big jackpot!

This is just one example of how enjoying your favorite casino games or trying something new can lead to a big win. Be sure to visit your local casino or take time to play online casino games to see how you fare and you just might be the next big winner!