Home » Blog » Learning From Mistakes Made By $8,000 Jackpot Winner

Learning From Mistakes Made By $8,000 Jackpot Winner 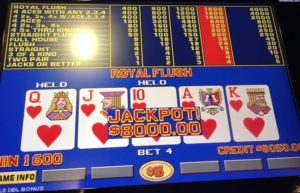 Binion’s recently posted a screenshot of an $8,000 royal flush on Twitter. It’s one of many jackpot tweets that come from that account daily. This specific screenshot showed a player making several mistakes.

The difference in royal flush payout subtracts one percent from the overall return. The return on four aces with a kicker drops 2.8 percent. This turns the 98.15 percent five-coin game into a 94.35 percent one on four coins.

If the player understood basic strategy for Triple Double Bonus, some of it does not apply here when only betting four coins. A player dealt AAA and a 2, 3 or 4 will keep the kicker in Triple Double Bonus when the payout is 800-1 if the fourth ace is drawn. When betting four coins, the player will only hold AAA. On the other hand, a player dealt trip twos, threes or fours with an ace, two, three or four kicker, will keep the trips and kicker, as that payout is not affected by the short bet.

The royal flush chase also changes. When a flush pays 6 in Triple Double Bonus, a player will keep three to a royal over four to a flush when betting five coins. That is not the case when the royal only pays 400-1. The four-card flush is held here instead. That play is also correct on the full-pay Triple Double Bonus pay table where a flush pays 7.

Adjusting for these strategy changes will add 0.2% to the player’s return when betting four coins. That brings it to 94.55 percent, which is still awful for video poker at any limit. This $20 player is giving up about $1.13 per hand in house edge if the play is perfect.

So many mistakes were made that it’s hard to believe this player is a video poker expert. It’s a safe bet that this player made enough strategy errors to add at least one percent to the house edge.

The Triple Double Bonus paytable on this machine is not full-pay. This 9/6/4 version returns 98.15 percent, according to Wizard of Odds. That assumes a player wagers five coins per hand and makes no mistakes.

If the player wanted the best return, he or she could have visited VPFree2 to find the full-pay versions of Triple Double Bonus. Ellis Island, Encore, and Wynn have this game for full pay on $5 machines. Wynn has it on $2 games as well. Dropping to the $1 denomination adds another half-dozen Las Vegas casinos to the list.

Playing the $2 version at Wynn for $10 a hand would result in a theoretical loss of only $34 an hour. Playing the $5 version for $20 would have improved the return-to-player by an estimated $229 per hour over the 9/6/4 Triple Double Bonus pay table.

I found machines at Binion’s that had Triple Double Bonus for $2 and $5 denominations with the same pay table. The player could have chosen $2 for $10 a hand. The house edge per hand for that game is 1.85 percent. The player would have theoretically lost $0.19 per hand, as opposed to $1.13 on double the bet, without going anywhere. That’s a difference of about $750 per hour.

If the player really insisted on playing for $20 instead of $10 or $25, Triple Double Bonus was the worst choice among all games to do it. That is because three of a kind only pays 2, as opposed to three on most other video poker games. The exchange for that is the higher return on four aces with a kicker, which the player does not receive on a short bet.

Four coins on 9/6/4 Double Double Bonus returns 97.83 percent with perfect play and offers the same bonus hands. This player wagering $20 would only theoretically lose $0.43 per hand on perfect play. That’s a loss of $347 per hour at 800 hands. Playing the 9/6/4 Triple Double Bonus game described above for four coins has an expected loss of $904 per hour.

Binion’s is among the best casino social media follows, and not just to mock players like this. While some of the content is of jackpot winners, there are many posts that are far more interesting.

Social media managers often go behind the scenes to areas that are not open to the public. This includes tours of the old Apache and Mint hotels.

…and one more winner from Missouri! She hit an $8000 Royal Flush jackpot on a $5 game with 4 coins bet! pic.twitter.com/t9CtBCw8Rl