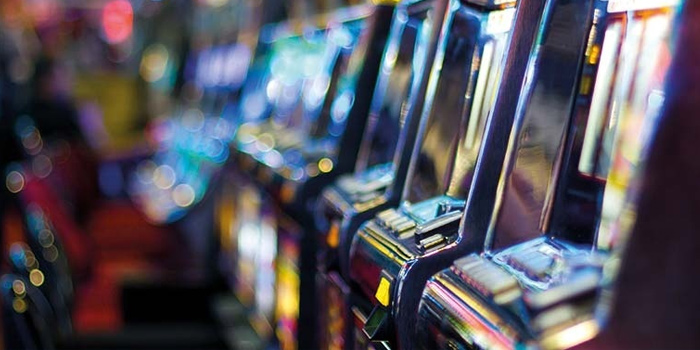 The world of gambling is constantly changing and evolving. A notable change has been how women have increased their presence at gambling-related events. Do women like to gamble? Are there more female gamblers nowadays? How do men and women differ in their betting behavior? OUSC set out to answer these questions. Consistent research over the past 10 to 15 years has established these facts.

Women’s gambling habits are much different than the gaming habits of men. In general, women prefer different casino games then men do. Women prefer to visit a casino in groups, while men prefer individual casino play. Whether they win or lose, female gamblers react to their good or bad fortune differently than a male would.

If women exhibit problem gambling, the behavior manifests in a myriad of different ways. Even if female pathological gamblers decide to commit a crime to pay off her gaming debts, that potential criminal likely will choose different means of committing that crime.

Scientists and sociologists have studied female gambling habits since the 1940s. Until the last few years, most research done on women’s gambling habits was conducted by men. For that reason, the bulk of research studies women in contrast to men, with male behavior as the baseline.

Such research has done a disservice to women in one way because it has limited the focus and looked at female gamblers as an aberration. Drawing on data from a traditionally male-dominated research field has its advantages because the parallel research allows for many comparisons.

In the past ten years, women’s gambling research changed significantly. A series of studies by Prof. Samantha Thomas of Deakin University in Australia have focused on female gambling habits in general. At the same time, an American academic, Michelle L. Malkin, has studied female problem gamblers and come to quite different conclusions than her academic peers. These emerging voices might eventually reconcile their differences with further data. For now, that isn’t the case. Yet a consensus on several matters exists.

Studies indicate that women have much different casino gaming habits than men. Women prefer social gaming. Even if they play on different games on slots row, they prefer to go with a group of friends. That leads to different game choices, because of the concentration required. Women prefer games like slot machines, and specialty games like lottery, Keno, and Bingo.

Studies which ask women why they prefer certain games return a number of responses. Here are common factors in female game choices. 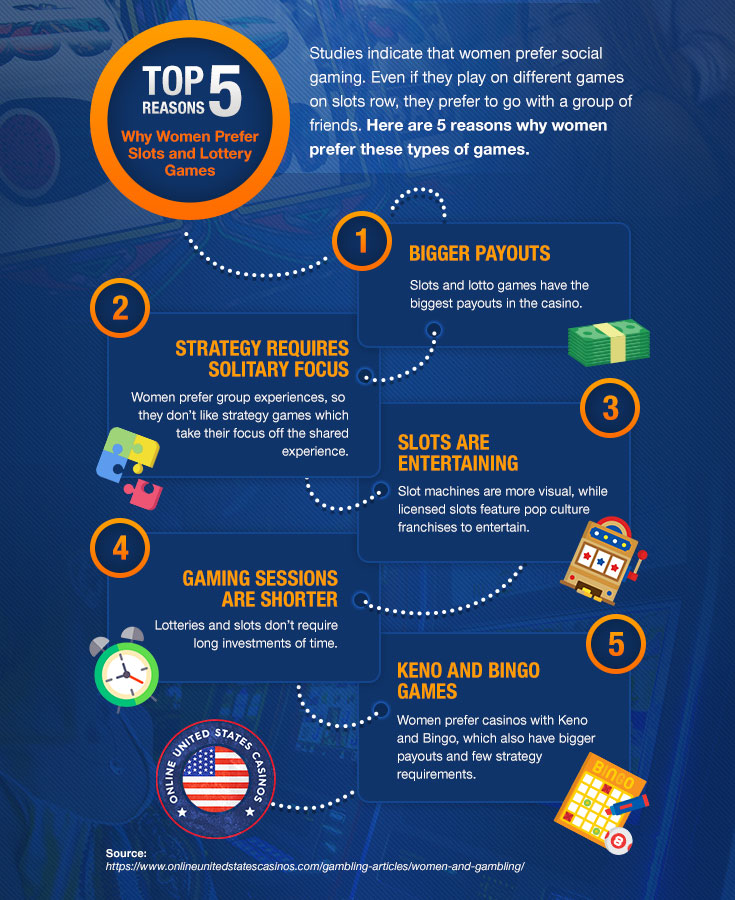 Over the decades, men have tended to prefer games like poker, blackjack, and video poker, which require strategy, study, and memorization. Male gamblers look for the game with the lowest house edge. They prefer games they think they can beat, or at least have an optimal chance of beating. For instance, “Beat the Dealer“ by Edward O. Thorp is the most famous book on blackjack.

Whether among friends, romantic partners, or strangers at a casino, men often gain their identity from displays of competence. While it meant to be funny, it displayed typical male thinking when Napoleon Dynamite said, “Girls only want boyfriends who have great skills.”

Women are not at the casino to display their proficiency to the crowd. Studies show they have different expectations from a casino visit.

Men and women exhibit different reactions to losses at the casino. In 2017, researchers from the University of Adelaide, the Swinburne University of Technology in Australia, and the Australian Gambling Research Centre (AGRC) released a study called “How do signs of problem gambling differ in men and women?” in Springer’s Journal of Gambling Studies.

The Australian researchers wrote that men were more likely to report anger and frustration when they had a losing streak. When playing the slots, they would display more aggression, either kicking or striking gaming machines when they lost. Men also showed outward signs of territorial behavior. They also were more likely to be rude to casino staff when losing.

Women, on the other hand, showed more signs of sadness or distress when they were losing money at the casino. Red flags for female slots players involved crying, sad expressions, or body language typically associated with depression.

In short, men show aggression and anger, while women show sadness or anxiety. 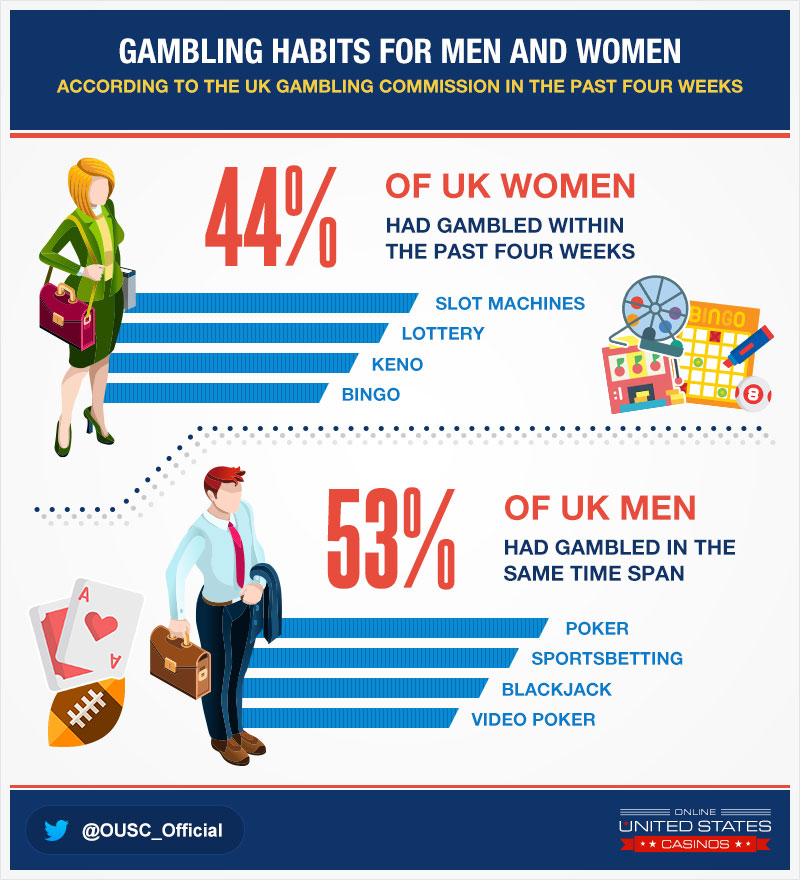 Generation differences emerged in the commission’s research. For instance, more millennials gambled than their predecessors.

Those who did were almost twice as likely (10% to 6%) to self-exclude as their predecessors. The younger generation of women who don’t join a self-exclusion list are much more aware (36% to 24%) that such a possibility exists.

The differences are often generational. Baby Boomer women prefer slot machines. Millennial female gamblers do not. A 2018 Australian gambling study, conducted by Samantha Thomas, Simone McCarthy, and several others, found that women age 16 to 34 viewed slot machines as a dangerous type of gambling.

Those same women viewed wagering on horse races as a lower form of risk. Traditional sportsbook and racebook bets are placed on a limited number of sporting events. The rapid-fire nature of electronic slots meant that millennials saw a greater possibility of harm in them.

In general, both female and male millennials view slots row as boring. If they play electronic gaming machines, millennials prefer electronic roulette studios, which allow for group interaction and have DJs playing live music. If millennials play slots, they want them to be skill-based slots, because they’re more like the smartphone games or social games they grew up playing.

The aforementioned Australian gambling study also focused on women gamblers’ product preferences and perceptions of product harm. Thomas and McCarthy studied differences by age, but also which type of women were at heightened risk for problem gambling.

Two of the key factors were loneliness and boredom. Women bettors who showed high levels of loneliness were at higher risk of exhibiting problem gambling. Those who got bored while playing also were at higher risk. The female preference for group visits to the casino appears to be healthy.

The UK Gambling Commission’s 2017 report showed that men are twice as likely to be problem gamblers as women. The research shows that problem gambling is growing, though that growth might be explained by changes in testing procedures.

The fluctuations between 2014 to 2016 show the unreliability of the research, which was conducted via a combination of telephone interviews and online surveys. The UK Gambling Commission noted 2015 was anomalous and should be discounted. The spike in 2016 also can be explained by betting testing of slot machines and fixed-odds betting terminals (FOBTs). The research also lowered the minimum testing age from 18 to 16.

Not all gender-related gambling research fits the consensus. Earlier in 2018, a new female voice entered the discussion and gave much different findings, though her research is not complete even at this writing. Michelle L. Malkin, a doctoral student at Michigan State University, has been conducting research on different reactions to gambling losses by men and woman, as well as the kind of gambling-related crimes they commit.

At a conference at the National Council on Problem Gambling (NCPG) in June 2018, Professor Malkin gave a presentation at UNLV’s Center for Gaming Research titled “Gender and Gambling Motivated Crime“. In her speech, Michelle L. Malkin claimed that women were more susceptible to problem gambling than men.

The opinion is controversial. As our discussion has shown, none other than the UK Gambling Commission reported that men are much more likely to be problem gamblers than women. Most studies down through the years have reported the same findings.

Part of Malkin’s contention makes sense: women prefer slots over table games. At the same time, most research contradicts her claims. The NCPG disputes much of the research on the levels of problem gambling that regulators and gaming companies produce, so it is no surprise that other assumptions would be challenged by a speaker at their conference.

In the course of her studies, Professor Malkin researched crimes committed by problem gamblers who need to repay gambling debts. Her research found that men are most likely to embezzle money to pay for gambling debts, while women are more likely to take out an additional credit card and max out the credit line.

Many in the gambling community will trust the UK gaming regulators and Australian university researchers more than problem gambling organizations, which has an obvious agenda. Still, the disparate voices in the UK, US, and Australian research communities show that more gender-focused gambling research is needed. What is clear for the OnlineUnitedStatesCasinos team is that accepted scientific and academic opinions should be challenged. Women’s gambling researchers have done yeoman’s work in the past ten years, but definitive research is still lacking.

What is undisputed is women and men are much different in their approaches to gambling. In a broad sense, women enjoy a visit to the casino in a different way. They respond to marketing tactics different. When it happens, women react differently to adversity. Such is to be expected, just as a female researcher’s focus might be different than a man’s focus. One hopes the recent set of reports lead to more interest in the subject from female researchers.