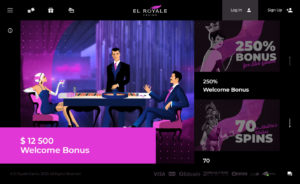 A prehistoric experience awaits on the reels of T-Rex by RealTime Gaming. This online slot game takes players straight into the dinosaur era where the monstrous creatures ruled the earth.

Of all the dinosaurs, the T-Rex reigns supreme, and in this game, he helps players to big wins by acting as the wild. With scatter symbols that activate a special feature and a random progressive in the mix, there is much to experience in this unique title!

This title includes a random progressive on top of an RTP over 97% and big prizes like 10,000 coins via the T-Rex or the Stegosaurus!

All You Need to Know About This Slot Game

How to Play T-Rex

How to Play T-Rex

In this RealTime Gaming progressive slot, you find payouts from left to right on the reels for all icons except for the scatter. The scatter pays in any position. Earn symbol combinations for payouts as well as a chance to earn free spins with a special feature!

The dino egg is the scatter symbol in the game, paying out for a two combination. It triggers a bonus feature with three, four, or five of a kind. The unique feature is a pick round where players click the eggs for up to 10 free spins.

When the T-Rex appears on the 3rd reel during free games, he eats the other dinosaurs that appear. Then, they are replaced with T-Rex icons before the payout. You can retrigger the feature.

T-Rex online slot includes a progressive jackpot that you can win at any time after the conclusion of a game. The grand prize is triggered at random and adds the prize to your other wins.

Symbols to Watch For

Wild: The T-Rex symbol substitutes for all others except the scatter, plus offer large payouts

Stegosaurus: This is the highest paying regular symbol in the game, offering 10,000 coins for a five symbol win when the T-Rex is there

Practice playing T-Rex for free before trying this real money slot at your favorite online casino.

Try Your Luck and Play T-Rex for Real Money

IMPORTANT: To play this slot game online, you may need your Flash Player enabled on your browser. Check out our easy Flash Player How-To Guide for Chrome and Safari if you need help.

Use the up and down arrow to choose your bet per spin.

Use the up and down arrow to choose to play one to 25 paylines.

Players who enjoy a realistic dinosaur theme with plenty of action on the reels are sure to enjoy RTG’s T-Rex. The real money online slot includes the basics, wilds, and scatters, along with a special pick feature that offers free spins. Additionally, the T-Rex can devour other dinosaurs, which creates even more excitement on the reels.

At El Royale, new players get . Use this offer to play T-Rex with some extra bankroll and more shots to hit the progressive jackpot. Sign up today to get started!