New Jersey gambling is full of rich history; some of it was legal, much of it not. Atlantic City casinos became legal in 1976, with illegal gambling activities before that. The other forms of legalized gambling in New Jersey are racing, a state lottery, and charitable games.

New Jersey became the third state to legalize online poker in 2013. The New Jersey casino games were second to be regulated in the nation. The state has been trying to enter the sports betting industry since 2012 to help its ailing racing and gaming industries. The sports leagues filed suit and won in 2013. New Jersey tried different languages in 2014. The leagues once again sued. The case is still in the court system.

There are three types of legal online gambling in New Jersey.

Off-track horse racing is permitted through 4NJBets, which is part of the Betfair brand.

New Jersey online poker is available at WSOP.com, 888, Borgata Poker, and Party Poker. Recently they have allowed PokerStars back into the US market and they are starting in New Jersey.

Online casino gambling is offered by those four sites as well as the Tropicana, Virgin Casino, Harrah’s, Caesars, Resorts, Mohegan Sun, Golden Nugget, Betfair, and Pala Casino. There are many online casinos that cater to US players, but those are specific to New Jersey residents.

Daily fantasy sports sites claim legality in New Jersey. The companies state that the contests are games of skill and not gambling. The attorney general has not opined on the topic. There is a bill pending that would clarify the position of the sites and add some player protections.

There are four types of live gambling available in New Jersey.

The horse racing industry is the oldest. Bets may be made on live or simulcast races. Freehold Raceway, The Meadowlands and Monmouth Park are the three tracks still open today.

There is a New Jersey state lottery. It is permitted to sell tickets to games of chance. This includes scratch-offs and lotto. Charities may hold raffles and bingo games.

The big gaming attraction in New Jersey are the Atlantic City casinos. That is the only place where you can find New Jersey casinos, and gamblers can find slot machines, video poker, and other casino games. There are no limits on the table games that are offered. Roulette, craps, blackjack, baccarat, pai gow and proprietary card games are all allowed. New Jersey casinos can only be found in Atlantic City, despite a bill that would have expanded gambling to other parts of the state.

The state is currently battling against a decline in gambling revenue, several New Jersey casinos closing. Atlantic City casinos may offer fantasy sports contests, although no casino offers this type of action.

New Jersey gambling laws state that any gambling expansion requires a constitutional amendment. That means voters must ultimately approve the changes. All gambling charges have the potential to be felonies in New Jersey.

Unlike most other states, New Jersey casinos may extend credit to customers. This was enacted in 1988 as a way to help compete with Nevada and attract high rollers. The only place where gambling can occur is with the city limits and at the Atlantic City casinos. The only other forms of gambling permitted in the state constitution are related to charities, horse racing, and the state lottery.

New Jersey online poker and casino games may be spread by Atlantic City casinos. These are available to anybody located within the state at the time of play. Geo-location and player verification services must be implemented to protect against underage gambling and identity theft. Atlantic City casinos may partner with third parties for software and other services.

Gamblers that lose money to illegal gambling schemes may sue to recover these losses. This is known as a qui tam law.

All gambling is regulated by the New Jersey Division of Gaming Enforcement. It is thought to be one of the most stringent gaming commissions in the world.

Atlantic City casinos pay eight percent of the win to New Jersey. There is also a 1.25 percent tax that goes towards city redevelopment. Online gambling pays a tax rate of 15 percent and 2.5 percent to the redevelopment fund.

There are three New Jersey racetracks available. These are the Meadowlands in East Rutherford, Freehold Raceway in Freehold, and Monmouth Park in Oceanport.

There are hundreds of lottery retailers in the state that sell tickets. There are dozens of charities that spread bingo nights.

There are more than a dozen New Jersey online poker and casino sites that are regulated by the New Jersey Division of Gaming Enforcement. 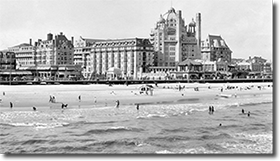 Horse racing started in New Jersey in the 1830’s. It was not regulated at the time. That did not happen until 1939.

Freehold Raceway was the first racetrack in New Jersey. It is the oldest one in the U.S. that is still in operation.

New Jersey voters approved a state lottery in 1970 by a more than 4-1 margin. Scratch-off tickets were sold the following year. New Jersey was the first state that sold lotto tickets where players could pick their own numbers as opposed to being forced to get quick picks. This occurred in 1975.

A movement to legalize gambling in Atlantic City started on the early 1970’s. A constitutional referendum failed in 1974 but passed two years later. It permitted Las Vegas-style casinos within the city limits of Atlantic City. No other areas were permitted to have these games or style of resorts. Resorts International became the first licensed casino in Atlantic City on May 26, 1978. It is still open today. 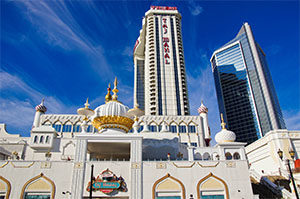 There were once 12 casinos in operation in Atlantic City. The recession and gambling expansion in neighboring states affected gaming revenue in Atlantic City. In 2014, four casinos closed. They were Atlantic Club, Trump Plaza, Showboat, and Revel. Atlantic Club, Revel, and Trump Plaza went bankrupt. Showboat was shuttered so that Caesars Entertainment could concentrate on the other three casinos it operates in the market. In 2016, a fifth casino closed, the Trump Taj Mahal.

Revel was an especially bizarre casino debacle. It broke ground in November 2007, just before the recession. It scaled back construction in the summer of 2008. Construction halted in March 2009.

Construction resumed at Revel in February 2011 after the company was promised tax breaks to complete the building. It was 47 stories with 1,400 hotel rooms. Much of the hotel tower was unfinished when Revel opened.

Revel finally opened on April 2, 2012. Revel’s investors thought it would change Atlantic City forever. It was an upscale option in a declining gaming market. Revel had policies that turned gamblers away. This included not permitting smoking and not offering a players club. Gamblers were an afterthought and not given comps anywhere near the same level as other casinos. It quickly filed for bankruptcy after just 10 months of operations. It emerged from bankruptcy, only to file for it a second time in June 2014. Revel closed on September 2, 2014, and has not reopened.

Online gambling was passed by the state legislature in 2011. Governor Christie vetoed it, stating at the time that offering gambling outside of Atlantic City violated the state constitution. Two years later, he signed a similar bill into law after gaining some concessions that included a higher tax rate and more funds for problem gambling.

Online poker and casino sites launched in November 2013. Casino revenues have slowly increased since while poker has gone the other way. The state’s online casinos take in about $15 million per month in online gaming revenue. This is compared to about $225 million per month at Atlantic City casinos.

New Jersey voters told the state legislature they supported sports betting in November 2011. This was a nonbinding referendum. It only took a few months for lawmakers to pass a law that would have permitted Las Vegas-style sports books in Atlantic City and at the state’s three racetracks. The NFL, NBA, NCAA, NHL and MLB all sued New Jersey to stop it. The sports leagues asserted that the federal Professional and Amateur Sports Protection Act forbids states from expanding sports betting. The courts sided with the leagues in 2013.

New Jersey went back to the drawing board and drafted new legislation that lawmakers thought would satisfy the court ruling. Once again, the sports leagues sued and prevailed. The Third Circuit Court of Appeals agreed to hear the case en banc.

What is the minimum gambling age in New Jersey?

Yes. There are three tracks; Monmouth Park, The Meadowlands and Freehold Raceway.

Yes. The casinos that offer it are Golden Nugget, Harrah’s, Caesars, Resorts and Tropicana. Betfair, 888, Virgin Casino and Mohegan Sun are other brands licensed to operate in New Jersey.

What online casino games are legal in New Jersey?

How do New Jersey sites know where I am located?

Geolocation services are used to pinpoint the exact location of the device being used to access the site.

How old do you have to be to play online poker and casino games in New Jersey?

Regulated poker and casino sites in New Jersey have a minimum age of 21, the same age as Atlantic City casinos.

How do New Jersey sites know how old I am?

The information given is matched with a public database. If the site cannot verify the player, he must submit documentation.

How do you deposit to a New Jersey poker and casino site?

How do I withdraw from New Jersey online poker rooms and casinos?

There is a state law that permits sports betting but professional and amateur sports leagues have prevailed in court challenging it.

Why have the sports leagues stopped New Jersey sports betting?

The Professional and Amateur Sports Protection Act forbids the expansion of sports gambling. The courts determined that the federal law is constitutional.

What is the Professional and Amateur Sports Protection Act?

It is a federal law often referred to by the acronym PASPA. It prevents states from offering sports betting that did not have it on the books in 1992. New Jersey was given one year to legislate sports betting at the time. It failed to do so.