Did you know that your gambling income is taxable? OnlineUnitedStatesCasinos has gathered everything you need to know about paying your gambling taxes straight from a Certified Public Accountant. For more information please visit our exclusive Gambling Taxes article.

The only form of legal online gambling New York is off-track betting on horses. TVG, TwinSpires, BetAmerica, and XpressBet all accept these types of bets. There are some restrictions on races held within New York. Those are off the board to encourage attendance at the tracks.

Daily fantasy sports are illegal in New York, according to State Attorney General Eric Schneiderman. He declared the contests illegal in November 2015. DraftKings and FanDuel were ordered out of the state. These two sites decided to challenge the opinion. The courts issued a stay that permitted the companies to remain in the state. It seems that a decision has been made and DFS sites can legally operate in New York.

Online casinos, poker, and sports betting sites that accept New York players are not licensed. These websites are widely believed to be illegal in the state.

The New York Lottery is among the most profitable in the country. It sells instant games through scratch-offs and lotto drawings. There are statewide lotto games that include Take 5, Win 4, and Pick 10. The New York Lottery also sells lotto tickets for interstate drawings. These include Mega Millions and Powerball. There are more than 18,000 lottery retailers in the state.

There are five Native American casinos in Upstate New York that offer casinos. These establishments are permitted to offer more casino games than the tracks. In addition to slots, video poker and electronic table games, these venues may offer live poker, craps, roulette, blackjack and other table games that use cards and are banked by the house. There are plenty of other New York casinos spread throughout the state that players can visit.

The only other form of gambling legal in New York is through charities. Raffles, bingo, and pull-tab games are permitted. 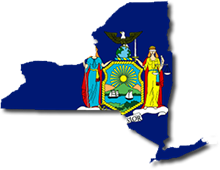 The New York Constitution only permits forms of gambling that are specifically legalized by voters. Other than that, New York gambling laws state that games of chance are illegal. Most gambling crimes are a misdemeanor in the state. Promoting gambling is a Class E felony. The state attorney general of the U.S. Attorney’s Office may initiate charges against individuals or companies that commit crimes related to gambling.

Find the casino nearest to you by looking at our general guide below, or use our New York casinos map for more detailed directions. 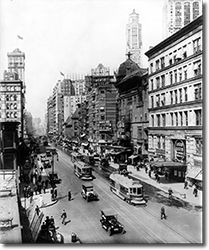 Gambling in New York was first recorded in 1655. That is when a horse track at Newmarket located in the Hempstead Plains opened. That area is known as Queens today. Horseracing did not remain legal from that time, however, Belmont Park, one of the most well-known tracks in the world, opened in 1905 and has operated ever since.

Betting at Belmont Park did not become fully legal until 1959. It was the first form of legalized gambling in the modern era in New York.

A state lottery was created by voters in November 1966. It passed by more than a 60 percent margin. The first tickets were sold the following year. It has since raised more than $35 billion for the state’s public schools.

New York became the first state outside Nevada to permit off-track betting on horses. This type of wagering would become a staple in New York City. That local government opened more than 100 betting shops that accepted wagers on races across the country. These were a part of life in the largest city in America. TV shows like Seinfeld and Law and Order regularly featured these establishments. Regional casinos, including one at Aqueduct, cannibalized the revenues once enjoyed by New York’s OTBs.

The expansion of gambling machines to tracks like Aqueduct put an end to these businesses. The last New York OTB betting shop closed in 2010. There have been some private attempts to reopen the most profitable storefronts in recent years.

New York was home to the most infamous online gambling bust in the world. Preet Bharara of the U.S. Attorney’s Office for the Southern District of New York filed indictments against the three largest U.S.-facing online poker rooms on April 15, 2011. This action shut down Full Tilt Poker and Absolute Poker. It ran PokerStars, the largest poker site in the world, out of the U.S. market. This generated $547 million in fines for the U.S. Government. The action was called Black Friday.

In November 2013, New York voters approved the addition of seven commercial casinos in the state. These licensees will be able to spread the same games as Upstate New York casinos.

In November 2015, New York Attorney General Eric Schneiderman determined that daily fantasy sports violated state law. FanDuel and DraftKings dispute this opinion. Both filed suit against the state for declaratory judgment. The case is working its way through the court system. In the meantime, the companies received a stay that allows them to remain in the New York market. Payment processors have run for the door while the legal battle continues.

What types of gambling are legal in New York?

What is the minimum gambling age in New York?

The only form of legal online betting in New York is off-track betting on horses.

TVG, TwinSpires, BetAmerica and XpressBet are all licensed to accept wagers in New York.

What games are legal at New York racinos?

What games are legal at New York casinos?

What is Black Friday?